Ever wonder how schools and community-based organizations participate in DiscoverU Week? Markese Walker-Brown, the experiential learning/internship coordinator at Communities in Schools of Federal Way, shares his experience organizing a visit to the Federal Way City Hall for Truman High School students. 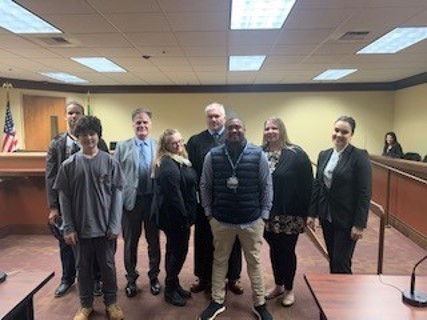 Being new to the education world, I have been excited to get involved as much as possible and provide students with many forms of learning, especially outside the classroom. When I caught wind of DiscoverU, I was eager to learn more. A colleague passed along information about a mini-grant that could create room for further learning for my scholars. I had to jump on that opportunity. The focus for my scholars was on “Lead Your Community Day,” which allows for students to learn about non-profit and public sector jobs in the community. Many of our students at the school I work at, Truman High School in Federal Way, are unfortunately not exposed to the many resources that are right in their backyard.

My idea was to bring eleven (many of them too cool to be photographed) of our scholars to City Hall and introduce them to City Hall officials. I was able to connect with Judge David Larson of the municipal court. He took time out of his busy morning to speak with our kids before court started, speak with them during court (off the record) about court proceedings, as well as allowed the prosecuting attorney and public defender to speak about their career paths, how they got there, and what exactly they do now. Our kids loved it! Initially, there was a sense of reluctance and hesitation to even sign up for the City Hall visit, but once we left for the day, it was all they were talking about. 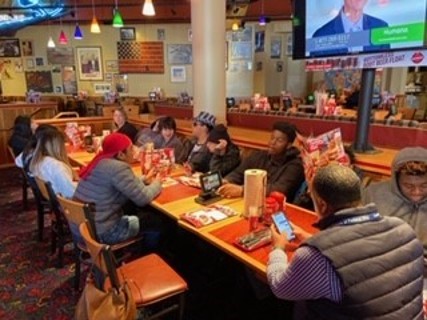 Our trip to City Hall also consisted of a panel discussion attended by the city’s Deputy Director of Public Works, Deputy Mayor, the Director of Finance, Chief of Police, and the Director of Parks in Recreation. This was extremely powerful because there were three people of color on the panel. I believe this brings awareness to the kids we serve on our campus, as our demographic is primarily students of color, and it creates a sense of “I can do it too.” My goal is to continue to implement DiscoverU beyond this week, as I find extreme value in this type of work. To end our City Hall educational career day, I took the kids to Red Robin, where they enjoyed a great meal and we discussed future career paths for each student that attended and how they plan on going about achieving their goals.